Zane Gray has been a lot of things, but his latest role is one he was born for—warrior-king of the Varangians. But he would give it up in a heartbeat if he could claim another title. Mate.

Gypsy Ulfson has been waiting for Zane for most of her life. Fate chose him to lead her people, and her to stand witness, but that isn’t the only destiny awaiting them. She has to accept him as her mate or risk the galaxy being destroyed, but is it fair to demand so much from a man destiny has already unduly burdened? And how much of her will survive the process?

Viking’s Awakening was first published in the Vikings Wild anthology. It has been revised and includes three new chapters. 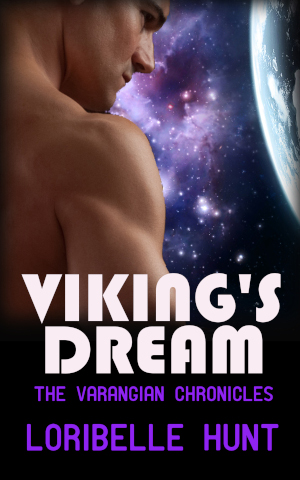 “You look grim,” Stone Ulfson, leader of the Varangians and captain of Thor’s Hammer said. He took a seat with his second-in-command Archer Bystrom, blocking Zane’s view of the woman driving him crazy. Which was probably for the best.

His obsession for her was much easier to handle before Stone’s mate, Jolie, had helped the seers complete the healing of his mind. When he’d arrived on the Hammer his head had been a mess, full of programming and shielding he couldn’t break on his own. Gypsy and her telepaths had been able to undo a lot of it, but somehow those bastards on Earth had divided his psyche, locking away the part that made him him. His soul or whatever you wanted to call it, leaving only the logical side somewhat intact. For some reason no one could explain, Jolie–though it had to be related to her ability to speak to ghosts–had been able to communicate with that isolated part of him, had been able to assist him and the other telepaths remove the final blocks and traps set by his enemies.

“The situation is grim, don’t you agree?” he replied when he realized Stone was waiting for an answer.

They’d left Midgard two days ago after evacuating the survivors of a vicious attack by the Faelis, scavengers from another part of the universe, who’d apparently exhausted their resources and moved onto more fertile ground. They’d attacked three other smaller colonies too. Novgorod was the first, before Midgard. Iona and Volkhov were at the same time as Midgard. Smaller was relative, though. The Varangian’s losses had been in the tens of thousands. After that Stone had ordered all their smaller colonies to retreat to their homeland on Delroi.

“We need to talk about this plan of yours, Zane.”

This time Stone sounded grim and Zane gave him a cold smile. The Varangians insisted Zane was destined to be their king, though Stone and Archer hadn’t handed over control yet. Despite their belief Zane was meant to be king, they wouldn’t hand over the reins easily. Hell, he didn’t blame them. It sounded crazy and farfetched to him too, and yet oddly right. Like he’d been born for it, his whole life leading up to this moment.

“It’s a standard battle practice. We know they’re scavengers. It makes sense to destroy everything that has to be left behind. We can rebuild cities, Stone. We can buy food and supplies. It makes no sense to leave anything behind that the Faelis can use against us or use to keep their own people alive. We need to lure them to a place of our choosing. A place where we have the numbers and the advantage. Burn and retreat. Why am I here if you aren’t even going to listen to me?”

He let his frustration show and Stone and Archer exchanged a nervous look. What the fuck? These two were professional soldiers. They’d been raised to be leaders. Men like them were trained not to show nerves or project their thoughts.

“I’ll order it done,” Stone said evenly. Then he hesitated which put Zane’s guard up. “There’s a part of the prophecy I don’t think you’ve been told.”

That fucking prophecy again. Apparently Varangian seers had been having visions for years about an unknown enemy and a warrior-king who’d lead them against that enemy. Gypsy had met him on Delroi shortly after he’d tried to kill his sister, when his mind was still shrouded in confusion and insanity, and had announced he was that king. At the time he’d been too fucked up to notice. Since then…well, he didn’t belong anywhere else anymore, did he? And in a lot of ways he’d already proven himself to Stone and his warriors. Maybe he would finally find out what was holding them back.

Stone took a deep breath. “Before you become king you have to be mated.”

Stunned and feeling like he’d been sucker punched, he sat back in his seat and glared at them. The Varangians and Delroi had fated mates, some quirk of their biology that allowed them to create a mental bond with one particular woman.

Not that he wouldn’t claim a particular woman on this ship that completely if he could. Unfortunately, Gypsy didn’t look at him like she’d entertain even a short affair. She kept him firmly in the friend and colleague category, which was slowly becoming a complete hell since they shared an apartment. Before the attack on Midgard he’d planned on asking for quarters in the single warriors section of the ship. Those free rooms were taken by refugees now and anyone else he could ask to borrow their spare room no longer had one. Until they reached Delroi, in another two days, he was stuck living in close proximity with a woman who didn’t want him and didn’t appear to see how desperately he wanted her.

Zane had a vague recollection about discussing blood tests when he’d first arrived on the Hammer, but his mind had been so clouded then it hadn’t stuck with him.

“I wasn’t in the condition to hear it then,” he said. She should have brought it up later, but he wasn’t about to criticize her in front of her brother.

“You’re half Delroi. We don’t know how. There was a Delroi ship that crashed on Earth about thirty years ago, but according to the records, Dax Trace and Blade Davich, were the only survivors.”

Zane knew about that. Jolie’s father was Blade Davich. Zane hadn’t met Dax, but he did know his son Sergei Trace, who’d been born on Earth and was another member of Tel, the organization of telepaths and telekinetics that had tried to destroy Zane’s mind. They’d gone to school together. He’d heard that Sergei, like he and his mother and sister, had also been quietly working against Tel even while part of it.

Stone shrugged. “Obviously there was, or there was another Delroi ship we don’t know about yet.”

“Why are you so sure there wasn’t a Varangian ship?”

“We don’t have a record of one visiting or going missing in the right time frame.”

Stone seemed sure and Zane didn’t know anything different. Maybe he should contact his mother. He’d never had a hint that his father wasn’t from Earth but then again, he had no memories of the man. “My sister?”

“After we learned about you we sent word to Jarek. Zola’s mate.”

Like Zane didn’t know the name? He had no memory of the man but he wasn’t likely to forget who he was.

“He hadn’t had any reason to check her DNA before, but he did confirm it, yes.” He scowled. “Gypsy didn’t say anything?”

They were in the community mess hall in the seers conclave area of the ship. Gypsy had been on the opposite side of the room when Stone and Archer entered, laughing with her friends and helping them cook lunch. He slid into the empty chair next to him so he could look around Archer and found her. She was sitting on a stool at the counter now, chatting with Jolie and Charlie, Archer’s mate. Both women were from Earth, psychically gifted, and had become fast friends with Gypsy.

“She didn’t say a word,” he growled when she suddenly turned to look at him and arched her eyebrows. He knew that expression too well. Slightly curious and a lot aloof.  He wanted to shake her up. Wanted to see something real.