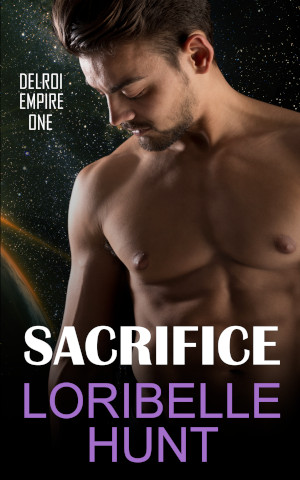 Selene Quora is one of Delroi’s deadliest priestess assassins, but the goddess cult isn’t the only group who has claims to her loyalty. Though her father is a clan chief, and she’s his only child, she can never rule it according to their tradition. Rule of her clan will fall to her mate. If she accepts him.

Unfortunately, her mate is Warrik Jain, chief of the clan that has long been the enemy of hers. Worse, he’s made it plain to everyone for years that he’d never accept a priestess mate. But when a looming war throws them together, can enemies become allies and mates? Or will it drive them further apart?

She shouldn’t have come, and she had only herself to blame. She’d been feeling a little homesick, so she’d figured why not accept the invitation? The next stage of her training would begin in a couple of days so there wasn’t any point in actually going home. Besides, it was a graduation day in Saber City, which happened about three times a year, not only for the warrior caste, but also the healer and artist schools and the gods’ temples, so the city was one big celebration, and who wanted to miss that? It was also the time of the year the goddess cult elevated most of its novices and apprentices. There were the occasional exceptions, of course. She and her best friend Danine Vaas had just reached full priestess status after years of preparation and had the tattoos to prove it, a stylized sun on the inside of her wrist and a crescent moon dissected by a sword above it.

To celebrate, Grange, Danine’s older brother and the patriarch of their sprawling family, had decided to throw a big party. That wasn’t unusual. There were hundreds of similar celebrations going on around the city that afternoon. Come nightfall, those parties would spill into the streets. The difference was Grange’s guest list, and Selene hadn’t been warned about it. Maybe he hadn’t realized there would be an issue? She didn’t know him well enough to guess his motives, but she’d be a lot more careful with him until she did.

The Vaas’s were part of the Saber Clan, and Grange had just completed a teaching rotation in the warrior training center. Several of his graduates and senior students numbered among the Jain clan in addition to his own. Unfortunately, the Jains were ancient enemies of her clan. Even that wasn’t really the problem. She’d encountered many of them before in Saber City. They were formal, but never insulting and certainly never threatening. That taboo was too ingrained in the warrior caste. The major issue as she saw it, was the pressure on her as the only child of the Quora clan chief, the only other living member of her family. There weren’t even any distant cousins. She was expected to mate, and her der’lan, the mate of her heart, would take over her clan.

Unfortunately, that mate had walked in a few minutes after her and met her gaze from the arched doorway. Lust had roared through her veins and woken her body with a fierceness that was frankly a little disconcerting in a roomful of strangers. She knew what that searing desire meant. She sipped her gazzi, a sweet blue vintage imported from the Green Zone, and tried to control her response, but she was aware of his every move.

He was doing a slow circuit of the room, stopping to talk a moment with almost everyone. Warrik Jain. She’d never met him in person, but she’d seen plenty of vids over the years, most released by his clan for publicity purposes no doubt. Her clan had done the same. They all did. She hadn’t expected him to be so much taller than her, though she should have. She was short for a Delroi woman, barely five-five, when average was more like five-ten. She didn’t have to imagine what he saw. What he thought of her. He had good shields, but not good enough. His thoughts leaked through. His frank gaze didn’t hide much, either. He didn’t like her short, barely shoulder length hair. He only focused on it for a minute, but his disapproval was easy to read even through her telepathic shields.

Like most southern males, tattoos stretched down the right side of his body, starting with his face. He had dark red hair, a short beard, and the greenest eyes she’d ever seen. He was twenty-three—two years older than her—and had only recently taken over leadership of his clan from his sick father. The Jain’s were keeping the former chief’s illness under the radar, but Selene’s father had spies who had confirmed it.

Warrik met her eyes again, across what had been a comfortably sized reception room just minutes ago, and her whole body seemed to clench in response. Damn, he was hot. They would probably never bond willingly, and they both knew it, but for just a second something flashed across his face that she couldn’t interpret. Desire? Yearning? Maybe even a little hope? Then it was gone, and he was all arrogant warrior as he stalked through the crowd. It took her moment to realize he was coming straight at her. A moment too late.

“Lady Quora. Or should I call you priestess?” he asked, taking her hand and lifting it to expose her inner forearm, exposing her tattoos. His disapproval was a pulse against her mind, and she pulled away.

“I’m surprised at your father’s generosity to his only heir. We both know there is only one way to save your clan. The goddess cult isn’t it.”

Of all the freaking gall. Being a hot, sexy enemy didn’t excuse being rude, but she probably wouldn’t say no to a quickie in a convenient closet. No. Damn, he was dangerous. Thank the goddess, he seemed unaware of his effect on her. And totally uninterested anyway.

“Yes. I should run out and find a willing partner. Have a son as soon as possible.”

His smile was chilling. “He wouldn’t survive long enough to get in your bed.”

The smile didn’t waver as he delivered the threat. Cold. Angry. Possessive. Every instinct she had responded to the challenge. To the claim he wasn’t actually prepared to make, and she’d never willingly accept.

“I’m a priestess, Lord Jain. I’m not in a particular rush to let anyone take over my life. And I have a few years before the issue of a son must be dealt with.”

He looked her over with zero sign of emotion. “It’s a good thing neither of us is in a hurry then. I want a traditional mate. When you’re through playing warrior, I trust you’ll let me know.”

She struggled to contain her anger. The hurt was harder, but she managed it.

“Your palace will fall down around your ears before that happens.”

His smile warmed a bit, and that put her on guard. “We’ll see, der’lan. We’ll see.” It was a softly spoken dare.

He left her but everyone nearby heard that claim. It was too much to hope the rumor wouldn’t spread.