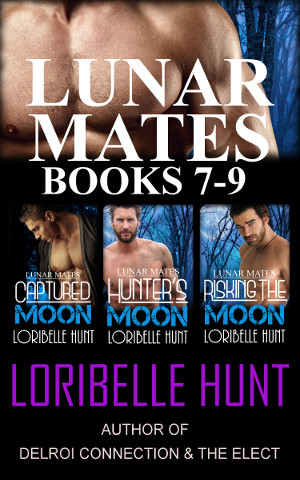 When her marriage ended, Abby Hart retreated to lick her wounds and rebuild her life. She’s found satisfaction and some success writing, and she’s happy. Mostly. Who wouldn’t welcome a little R&R?

Many of her books revolve around two men modeled after real life werewolf twins Rule and Lawe Sanders. When two of her friends talk her into participating in a local date auction, fantasy and reality begin to mix. Rest and relaxation never felt so good, but is reality more than she bargained for? HUNTER’S MOON

Gia Roberts is part of a secret organization of humans who hunt rogue shifters, none of whom know she’s a shifter herself and a werewolf princess. Her royal heritage is her most closely guarded secret known only by her family. It’s not a bad life but lately she’s been wanting more.

Then the unexpected happens and her group forms a tentative alliance with the werewolf hunters. Her boss pairs her up with Anthony, the leader of the group. Working with him is torture. He’s irritating. He gets on her last nerve. And he sets her body on fire.

The last thing Gia wants to do is give into the craving she feels for the wolf, but he gets harder to resist with each passing week. When yet another secret from her past comes back to haunt her, will she be able to trust him with everything or will he be the worst enemy of all?