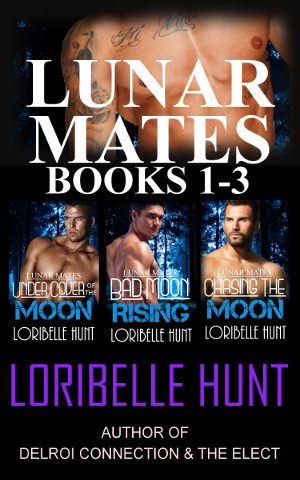 Books included: Under Cover of the Moon, Bad Moon Rising, Chasing the Moon

UNDER COVER OF THE MOON

Darius Stewart has been banished and offered the leadership of a new pack. With the pack to settle and a rogue wolf terrorizing the local population, threatening to expose their species, the last thing he needs is a mate further complicating his life.

That’s just fine with Meg O’Reilly. A witch, she knows something is not right in her town. Discovering there are good werewolves, bad werewolves, and the possessive, bossy, sexy alpha wolf trying to take over her life is not exactly welcome. Too bad she can’t seem to keep her distance.

This book was originally published in 2006. It has been revised and expanded.

After spending his life hunting rogue werewolves, Trey Williams is looking forward to a quiet retirement in Alabama. But between hunting for the local outlaw wolf and claiming his newfound mate, Tara Burke, that peace doesn’t last long. Can he find the mysterious wolf before it endangers his new mate?

Tara knows all about werewolves and she doesn’t want one, thank you very much, but there’s no denying the heat that flares between her and Trey. Can she use her gift for witchcraft to break the bond between them? And does she really want to?

This is a re-release. It has been revised and expanded.

Jackson has problems. His most trusted friends are gone, his Beta is convinced another werewolf stole his mate, someone in his pack is trying to steal his job, and his woman is on the run. When everything comes to a head at once, the situation quickly escalates to deadly levels.

Summer Lambert, the last single hold out of the witch cousins, has a relaxing and solitary two-week mountain vacation planned. She is outraged to learn the whole trip was a ruse by Jackson to get her to his home. Once there, she is trapped and finds herself increasingly drawn into his world.

As the sparks fly between Jackson and Summer, his enemies move into position. Will he be able to outmaneuver them before it’s too late?

This book has been revised and expanded.