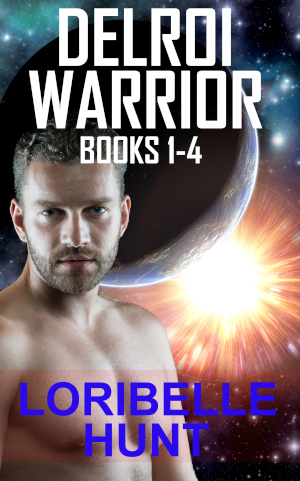 Love that breaks all the rules…

Every culture has its secrets, some surprising and some horrifying, and Delroi is no different. When Sergei Trace, half Delroi half Earthling, arrived on his father’s home planet he expected some culture shock. He’s used to living in the shadows, on the fringes of life. On Delroi he’s thrust into the light.

Kayna Idis has a serious problem. She’s in love with the wrong man. Razor Deriq is everything she always wanted. Strong and steadfast. Sexy and fun. Then Sergei enters her life just as compelling in his own way. He’s dark and mysterious. Hard and unflinching. And she wonders if she can have them both.

Razor is determined to keep them both, but first he needs to find and eliminate the warriors threatening Kayna. Pairing up with Sergei for the task gives him the perfect opportunity for seduction, but will Sergei ever lower his shields enough to let him and Kayna in?

Angie Crews has secrets. Lots of them. Coming to Delroi and meeting two men who want her to break all her rules is not happening, no matter how tempting they are.

Vidar Stian can’t come to terms with his past, and finding two mates he’s driven to protect, no matter the danger, isn’t helping. Especially when they refuse to be protected.

Somehow Marek Naveen has to convince them to give a relationship a chance because there’s no way he’s letting either one of them go.

Cassius Stian has come to Earth to take over its defenses against the galaxy’s new enemy, the Faelis Consortium. The last thing he expects on his arrival is to meet his mate.

General Talia Lowell isn’t quite sure what to do with the alien warrior who barges into her life, but since he refuses to budge from his insistence she’s his mate, she figures she might as well enjoy it while it lasts.

Cassius has other plans, however. He’s here to stay.

When Reza Stian receives word that the mate he’s refused to claim has been kidnapped by a faction of her clan, he can’t sit back and do nothing. He finds her having a great time however, and amused with his rush to rescue her. The situation is further complicated by her lover, Nicos Jain, who is also Reza’s mate, which is completely unexpected.

But things are not as simple as they seem. Carisma Green is heir to one of the most powerful clans on Delroi, the secretive Green Clan, and she doesn’t have time for Reza’s over protectiveness. She’s hunting a killer who is stalking her in return.

When Reza learns the truth he’s determined to protect her at any cost. But will he drive her away in the process?