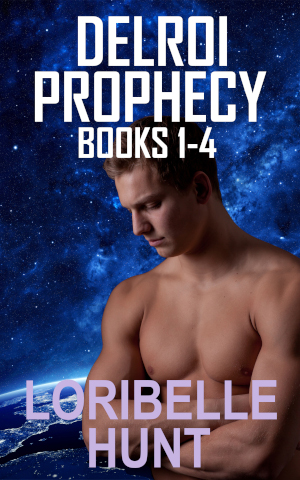 Delroi Prophecy is a collection of Freedom, Irresistible, Redemption, and Absolution.

Kareena Smith, leader of the unregistered telepaths of Earth, waged a secret war against the Tel Group and her government as long as she could remember. Until Tel captured her, her second in command, and one of their own, a defector. After months of captivity and several failed escape attempts, the three women are rescued by a group of Delroi warriors. There’s a price on her head and nothing left for her at home. Delroi offers sanctuary she can’t refuse.

After six months captivity, Parker Reed is thrilled to be free and offered asylum on Delroi, joining her fellow prisoners Kareena and Zola. It’s not long before she realizes that could have been a huge mistake. She’s a woman used to being in control and she devoted her life to one purpose: bringing down the corrupt.

Anna Leigh Gray set out to save her daughter. While her former allies, the evil and malicious Tel Group has been dealt a major blow, they haven’t been destroyed and their sights are focused on one thing. Killing her daughter. To protect her Anna Leigh has to get to Delroi. The last thing she expects is being claimed by the dangerous, sexy Xan Bana. His telepathy is as strong as hers, his mind is fascinating, and he has moves in the bedroom she’d never been aware she missing. But he’s an enigmatic warrior and she’s not convinced his motives are pure.