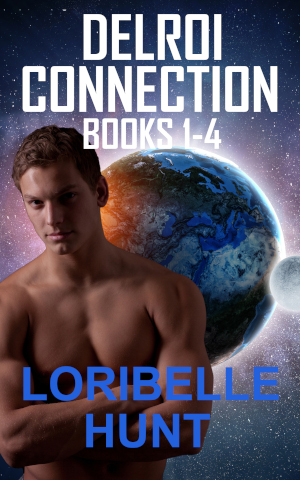 Sergeant Major Laney Bradford has always played her part and served her people well, but the Delroi’s surrender demands are a bit extreme. Marriage to one of them? Not likely. But she’s fought for peace her entire life and when surrender talks are threatened by a conspiracy lead by her people, Laney must choose. Will she submit to the alien invader or lead the fight against him?

Col. Kendall Marks is both soldier and physician. Her journey to Delroi has two purposes-deliver her best friend’s baby and indulge her scientific fascination with the alien race. The last thing she expects upon her arrival is to get caught up in political intrigue or develop an unreasonable attraction to the Delroi Warrior Overchief.

Britt Anderson is retired. Secretive and fiercely independent, she journeys to Delroi to spend time with her two oldest friends. She doesn’t expect to be dragged back into the spy business when she gets there, but the lure is impossible to fight for a not so reformed adrenalin junkie. Danger. Conspiracy. What’s not to love?

Janice Hawkins is a woman on a mission, and it doesn’t include getting wrapped up—or naked—with Delroi warrior Falkor Trace. No matter how appealing and sexy he is. After a couple of weeks on Delroi, she returns to Earth determined to infiltrate the shadowy Tel Group. The secretive organization of telepaths trained her, used her for dishonorable means, and may have been behind the deaths of her parents. When word reaches her the organization is once again recruiting minors, she knows the time has come to act. She may not be left standing at the end, but she’s taking them with her.