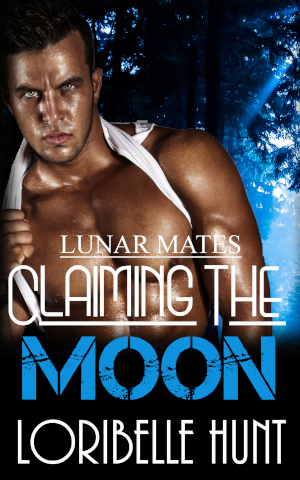 Hunter archivist, Ellen Monroe, is being stalked. Unable to determine who the threat is, her boss insists she move into Hunter headquarters until things are straightened out. Then he calls the last person—and the only person—Ellen wants to see.

Clint Osborn has his own reasons, dark and private, for not claiming Ellen, but when her life is endangered he can’t trust anyone else to her safety. Unfortunately, she’s not really safe from him either. Can he eliminate the threat against her before he’s forced to walk away from temptation? Or is it already too late for them both?

This book was originally published in 2007. It has been revised and expanded.

It was so freaking cold her bones hurt but that wasn’t what made her shiver, look over her shoulder and hurry up the walk to her condo door. She’d been edgy and nervous for days, but she couldn’t pinpoint why and the tiny hairs on the back of her neck rose as if someone watched her. If she didn’t know better, she’d think Clint had finally decided to claim her. Her stomach clenched as anger, and yeah bitterness, rose. Not likely. And she wouldn’t welcome him if he tried now.

Once, she would have. Once, she would have taken him gladly. But he wanted nothing to do with her, had made it bluntly clear that she was too young, the differences in their ages too great. She grimaced. Well, she wasn’t too young anymore. She’d just passed her thirtieth birthday. There was a time when she’d argued that ten years wasn’t that big of a deal, but he’d refused to hear it. She’d eventually given up all hope that they would one day be together, but when she saw him at Christmas at the Appalachian alpha’s home, she’d thought he would finally give in. He’d been so territorial. Her sex grew wet at the memory of the possessive heat in his eyes.

Her keys trembled in her hands and she lost her grip on them. She bent to pick them up, fingers closing over them as someone grabbed her from behind. One gloved hand clamped over her mouth, while the attacker banded his other arm around her upper body, pinning her arms to her sides. She reacted without thinking, flipping open the small knife on her keychain and jabbing it into his thigh. Howling, he released her.

“Bitch,” he hissed, reaching for her while holding a hand to the wound, but she was already moving.

She spun around and rammed her knee in his groin. When he dropped to the ground, holding himself and moaning, she kicked him in the head hard enough to knock him out. With a grim smile, she turned back to her door and quickly let herself in. Clint had done one good thing for her. He’d made damn sure she knew how to defend herself. Of course, that was because he wasn’t willing to do it himself. She pressed her lips into a firm line, ignoring her hurt and bruised pride. She didn’t need the aggravation of a mate anyway.

Inside, she locked the door and hurried for the phone. She hesitated over the nine button, then decided to call her boss first. She didn’t know if the man outside was a werewolf or not, but since she worked with the hunters who tracked down rogues, she should get one of them to verify it first. Werewolves handled their own justice.

It was a brief conversation. When she hung up, she stared at the phone and dug her fingernails into her palms, fighting the instinct to call Clint. He was hundreds of miles away, couldn’t do anything, and probably wouldn’t hold her even if he was there. She wrapped her arms around her waist and fought the tremors in her limbs, the sob clogging her throat. Told herself it was just a reaction to the adrenalin. But she recognized the denial for what it was.

Suck it up, Ellen. He doesn’t want you. Just get over it already.

The harsh pep talk helped, and she shrugged out of her coat. Anthony would be there in less than five minutes, he just lived a few miles away, and she had to pull herself together before his arrival. He’d already told her once that week that she looked like hell and had been getting worse since the few days she’d spent with the Appalachian pack. He wanted her to open up, talk about it, and get it out of her system. She snorted. Talking wouldn’t do a damn bit of good, so she’d just shaken her head and walked away.

Worse, he was gonna freak out about the safety of her living alone again. The Society, a group of rogue werewolves and feral werefelines, had begun hunting women whose fathers or grandfathers were wolf or feline shifters because rumors were spreading that some of those women might be able to shift. Ellen’s father had been an alpha but she hadn’t gotten that lucky. She was plain ole human. She only knew of one female werewolf but there had to be more. Anthony didn’t care about her lack of shifting capabilities; he was all about safety.

Someone pounded on the door so hard she feared it would burst open, and she rushed down the hall, checking the peephole before opening it. The werewolf on the other side was big, mean, and brutal when necessary, but he stared down at her with a worried expression on his face. “You okay?”

“Yeah. Well trained, remember?” To be fair, it wasn’t only Clint who’d trained her in self-defense. She sparred with Anthony regularly. She looked out the door behind him and thought her heart would stop. “Where is he?”

Anthony shook his head. “Gone. Pack a bag. You’re staying at HQ until we figure out what’s going on.”

She started to shake her head in refusal, but one look at his stubborn expression, and she knew it would be a waste of time. “Give me five minutes.”

She packed a bag quickly, tossed in her makeup bag, grabbed her laptop, and they were out the door. She locked it carefully behind her then put her things in the trunk of her car. Anthony followed her back to a private estate that served as hunter headquarters.