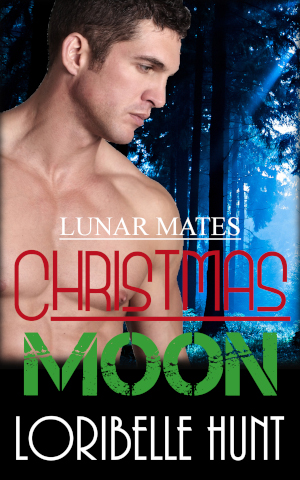 Lilah Anderson is a woman with secrets. Always moving, her identity known to a very small few, she escapes a rogue and seeks assistance from the one werewolf she knows absolutely would never betray her. His strategy of hide-in-plain-sight would have worked fine if she hadn’t gone to a strange pack posing as an innocent human and run smack into not one but two mates.

Cooper and Aaron Williamson, both retired hunters, are eager to claim Lilah. She’s smart, beautiful, psychically talented. As her secrets unravel, their fascination with her and dedication to her grows. But when her true nature is revealed will they accept her or let her walk away?

Christmas Moon was previously published. It has been rewritten and expanded.

She was so screwed and not in the fun way. Lilah paused in front of a display window and carefully checked around her, but it just confirmed what she already knew. Yep, that was definitely the creep behind her. She’d met him a couple of weeks ago at the coffee shop near where she was staying. He’d introduced himself as Gage Rylon and he’d watched her closely for a reaction, but she’d been trained better than this idiot could ever have imagined. Her grandfather had made sure that she was an excellent fighter and as paranoid as he was, which was good, because the asshole following her was not Gage Rylon. They hadn’t seen each other since they were kids, but she’d know Gage, her Regis and cousin, anywhere. That recognition was in her fucking DNA.

The guy could just happen to have the same name. Stranger things had happened. It wasn’t like the future werewolf king had a trademark on his name. Her name was a fake too. There were maybe four werewolves alive who knew she was, or who should know. Gage too, for that matter. So, she’d hoped at first it was a weird coincidence, but after the third time the creep had ‘run’ into her she’d changed her routine and her morning stop.

She was in regular contact with Gage—he was just about her only living family—and had considered going to him and his pack. He’d protect her without a lot of questions, but she had reasons to stay off his radar too. Reasons why she needed to deal with this on her own if she could and as quietly as possible. It was better to walk into a trap she knew existed, on her terms. She had advantages no one else knew about.

She hadn’t seen the imposter again until yesterday and she hadn’t been positive then. There was no doubting it now. It was time to get out of Orlando and disappear. She should have listened to her gut when she met him, but maybe it was better this way. If she’d vanished he wouldn’t have given up. He would have kept following her.

She was pretty sure he was Society. She’d received a warning that the group of rogue werewolves and werefelines, who believed humans were prey and should be fair game, were hunting women without the protection of a pack, especially from the old Atlanta pack. The last ruling Regis’s pack. Women they believed were werewolves. As far as most people in their small world were aware there were no female shifters. Somehow the Society had figured out otherwise. Lucky her. But how had they found out about her? No one ever had known except her grandfather and the only people he trusted. Pop had been gone for years. So were all but one of his friends, and he would never betray her. She was careful, and her family’s name had been changed before she was born. What had given her away?

She’d lingered too long. She scented him inching forward so she slipped into a group of teenagers, chatting and laughing as they walked down the sidewalk, moved into another clump of strangers as soon as a place opened up, but she could feel him behind her. Stalking her. She should be afraid but she was too pissed off, mostly at herself for getting into this mess. What the fuck had she been thinking?

Now she had to figure out how to eliminate the threat on Black freaking Friday in a packed shopping area. Hey, no big deal, and she realized when she looked around to get her bearings, she’d lucked out. She wasn’t just a female shifter. Her mother had been a witch and Lilah had inherited her ability to communicate with animals. Not Dr. Doolittle communicating but a weird kind of telepathy of images and feelings. And she was coming up to a pet store she knew well. The owner was a friend, and he usually brought his dogs to work with him and gave them free run of the place.

She didn’t make it three feet through the door before a big husky called Rocky had glued himself to her side. He was a pretty black and gray with pale blue eyes and was quickly joined by Lucy, an energetic beagle and his constant companion. She got a worried vibe from them. Lucy licked her hand, turned and trotted off towards the back of the store. Despite her dire situation she grinned. Lilah recognized an order when she saw one, even if it came from a dog. She ducked behind a large shelf and headed towards the back.

She backed into one of the visiting alcoves and Rocky and Lucy piled onto the loveseat with her, Lucy in her lap. She faked a smile for David. “I thought I would visit my favorite friends. And I thought, maybe some creep was following me.”

She was working him and she really hated that, but he reacted the way she expected him to. He stiffened for just a second, so short she almost missed it and she was good. He nodded, jaw clenched.

“Why don’t you take Rocky and Lucy home with you? I’ll get them after work.” He handed her his keys. “My car is out back. I’ll deal with anyone who comes in looking for you.”

He didn’t offer to call the cops and she hadn’t expected him to. He was some kind of feline shifter, though they’d never discussed that, and they tended to be loners. She’d been given David’s name in the anonymous warning she’d received about Society hunters and made a point of befriending him. She wasn’t sure what he knew about her and didn’t ask now.

They were friends—as much as two loners could be—and she didn’t break their unspoken rule. No deep, dark personal secrets or questions. She felt bad, wrong, for leaving her werewolf stalker for David to deal with, but one look at his eyes, dark and angry, and she bit her tongue. He could take care of himself and would be offended if she didn’t let him. She jumped when the bells over the door jingled. Fuck. She was more rattled than she’d thought.

She left a little reluctantly. The dogs pressed close to her as she went through the backdoor and to David’s SUV. It was a newish popular model, but nothing that stood out. Rocky hopped into the passenger seat and made room for Lucy. Lilah didn’t dally and fifteen minutes later pulled into her complex. She parked and was reaching for the door handle when Rocky’s lips pulled back and he snarled. Jerking her hand back, she restarted the car and looked around. Nothing looked out of the ordinary, except the dogs. Both were focused out the windshield on her front door, hackles raised and growling deep in their throats.

She didn’t ignore their instincts and as she backed out of the space her front door flew open. She didn’t get a good look at the guy who ran out until she was racing away and saw him in her rearview mirror. For a second she couldn’t believe her eyes. There was no way the Gage imposter could have got to her condo before her. No fucking way. Then the subtle differences registered. He was a little taller. His shoulders not quite as broad. The hair a shade lighter and longer. Siblings. Twins maybe? Wasn’t that just her fucking luck? Thank God David was dealing with the other one, but now she was really paranoid. Who the hell were these guys? She hopped on the interstate, watching her rearview mirror the whole time, and picked a random exit when she was sure no one had followed. She pulled into a fast food parking lot and called David.

“Lilah,” he answered on the first ring. “Are you okay?”

“I’ll be fine, but I think it would be a good idea if we both disappeared for a while.” He paused a long beat. “I have pack members I can go to. So do you.”

Well. That answered one mystery, didn’t it? He knew she was connected to the shifter world.

“Can you meet me at a car rental agency? The airport would be good. I’ll get a vehicle and you can get your dogs back,” she said, trying to sound joking.

“The sooner the better, I think.”

He met her in the parking lot. Neither acknowledged any new revelations about the other and she hugged him gently. He looked like hell, bruised and scratched.

“I’ll be okay. You know where you’re going?” he asked gently.

When she came back outside after renting a car, he was still there. He followed her out of the airport and for almost an hour, heading north on the highway, waved when he finally exited. A few hours later she pulled into the lot of a bar and grill, parked, and stared at the sign. She’d known about this place for years, had had the names of several werewolves in the local pack. It still made her nervous as hell to walk into the place, but she took a deep breath and went inside. It was brightly lit and not very crowded, being between lunch and dinner. She approached a table with two men sitting at it and they fell silent when she stopped. She focused on the one she knew.

“Hello, Gage,” she said softly. “I have a little bit of a problem.”

It took him a second, but he broke into a grin, stood. “Lilah?”

She hugged him quick and hard. “In the flesh.”

“It’s been a long time. Sit down. Tell me what you need.”